The National Football League is the most diverse and watched sports tournament in the United States. NFL players are constantly scrutinized and judged over their physical features and traits, such as heights, strength, and weight.

The standard size for an NFL player is 6ft 2 inches. However, many players exceed the standard height. It doesn’t hurt to have a few inches or feet on a rival, but being tall doesn’t always translate into dominance on the football field.

The tallest NFL player of all time has a height of 7 ft which is far more than you would require to be eligible for the NFL.

A player was so tall that his nickname is literally “too tall,” and a player who changed NFL history by permanently altering the NFL rule are all included in our blog. In this blog, we have discussed the tallest players in NFL and how their height impacted their games.

The following are the names of the tallest NFL players with their heights and franchises:

We have compiled a list of tallest the players of the NFL in NFL history and their heights from highest to lowest. These top10 tallest NFL players are sometimes called “too tall to play football.” 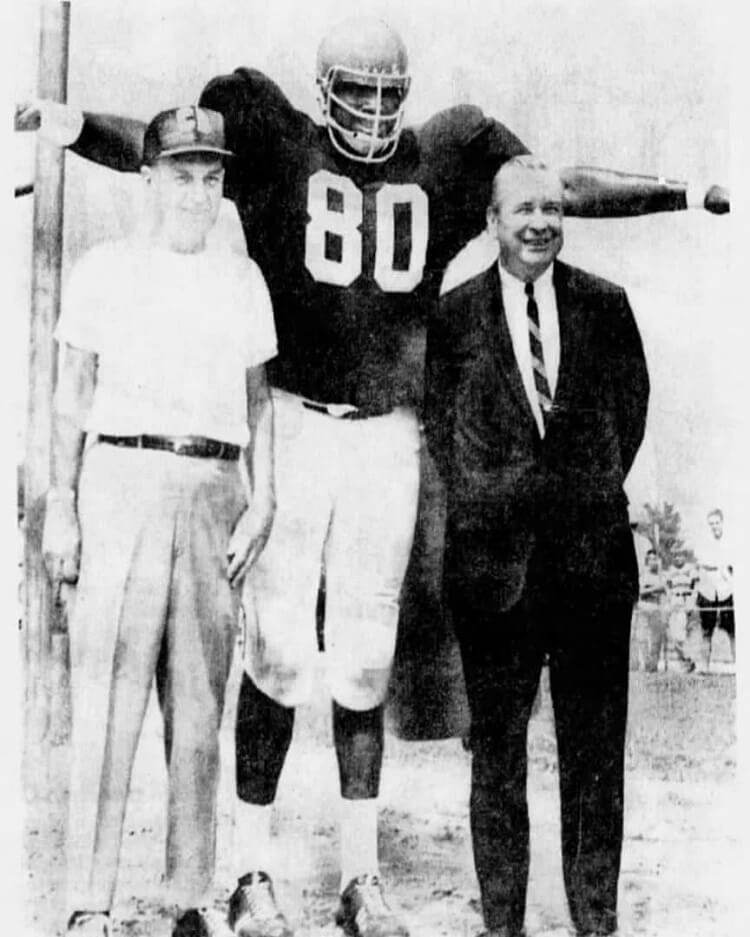 Richard Sligh is on top of our list because he is the tallest NFL player, with a height of 7 ft 0 inch. He is the only NFL player whose height exceeded the 7ft mark in history.

Richard Sligh was an active football player at North Carolina University. Later he was drafted by Oakland Raiders. He played one season with the Raiders as a rookie in the AFL.

Sligh was only a part of eight NFL games in total. He was kept as a reserve when the Raiders played Super Bowl II with the Green Bay Packers. Richard died at the age of 64 due to natural causes. 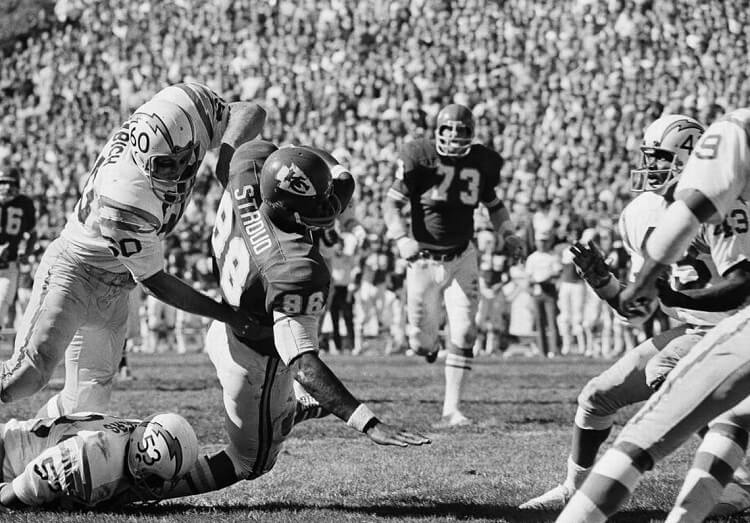 Morris Stroud is second on our list due to his ridiculous height of 6 ft 10 inches. Stroud only played with one NFL team as a tight end, the Kansas City Chiefs, in the 1960s and 1970s.

He won Super Bowl IV with Kansas City and caught seven touchdowns. He was so tall that he led to the permanent rule change in the NFL, called the Stroud Rule, which states that:

“goal tending by any player leaping up to deflect a kick as it passes above the crossbar of a goal post is prohibited. The referee could award 3 points for a palpably unfair act.” 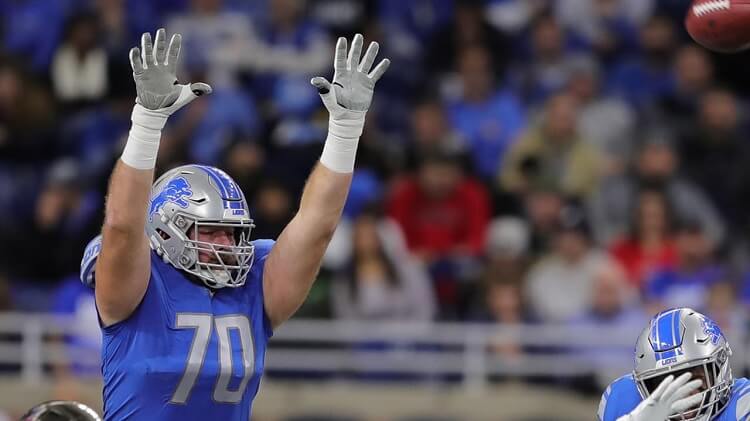 Dan Skipper has a towering height of 6 ft 10 inches with a 325-pond body. Skipper used to play college football when he was enrolled at the University of Arkansas. He was the first ever Arkansas player who made it to the All-American Rooster.

Dan appeared in the 2017 NFL Draft but remains undrafted. However, he was later drafted by Dallas Cowboys.

Dan Skipper has also been a part of the practice squad of the Detroit Lions, Denver Broncos, New England Patriots, Houston Texans, and Denver Broncos.

Dan has only played a handful of the NFL games. Along with New England Patriots, he won the Super Bowl in 2019. He also started his first career at the age of 28 in 2022. 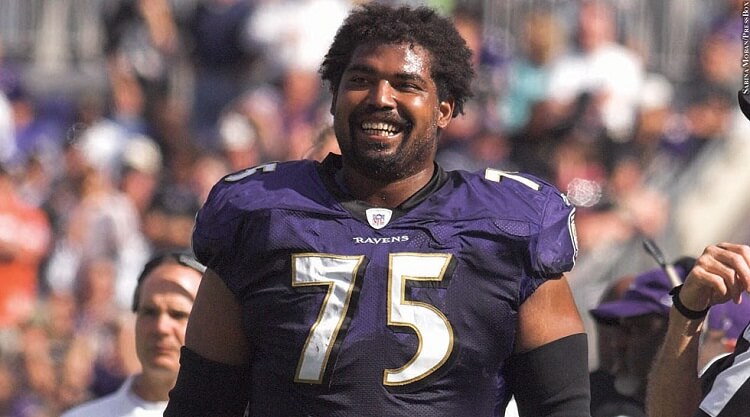 Jonathan Ogden is one of the tallest players in the NFL at 6ft 9 inches. He is also one of the most outstanding players on the list. Before being drafted into the NFL, Ogden used to play college football with UCLA Bruins.

Ogden was drafted as the first pick by Baltimore Ravens in 1996. Due to his high achievements, he was regularly awarded Hawaii trips. 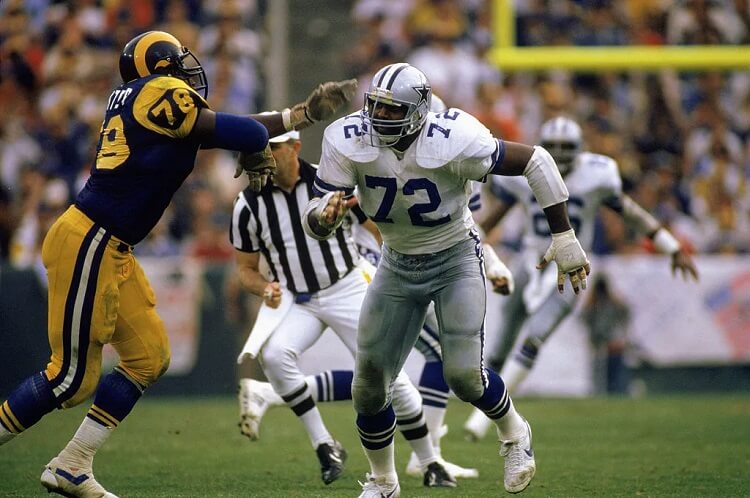 Ed Jones is one of the tallest NFL players on our list. Ed Jones was nicknamed Ed “Too Tall” Jones due to his unusual height of 6 ft 9 inches. Ed left his basketball career at Taneese State University to join the NFL.

He developed into a dominant collegiate football tackle, recording 38 sacks last season before being chosen first by the Dallas Cowboys in the 1974 NFL Draft. Even though, at one point in his career, Jones focused on boxing, his influence on the NFL is still powerful.

The athlete was selected three times to the Pro Bowl and All-Pro teams. He was also a squad member that won three Super Bowls between 1981 and 1983. 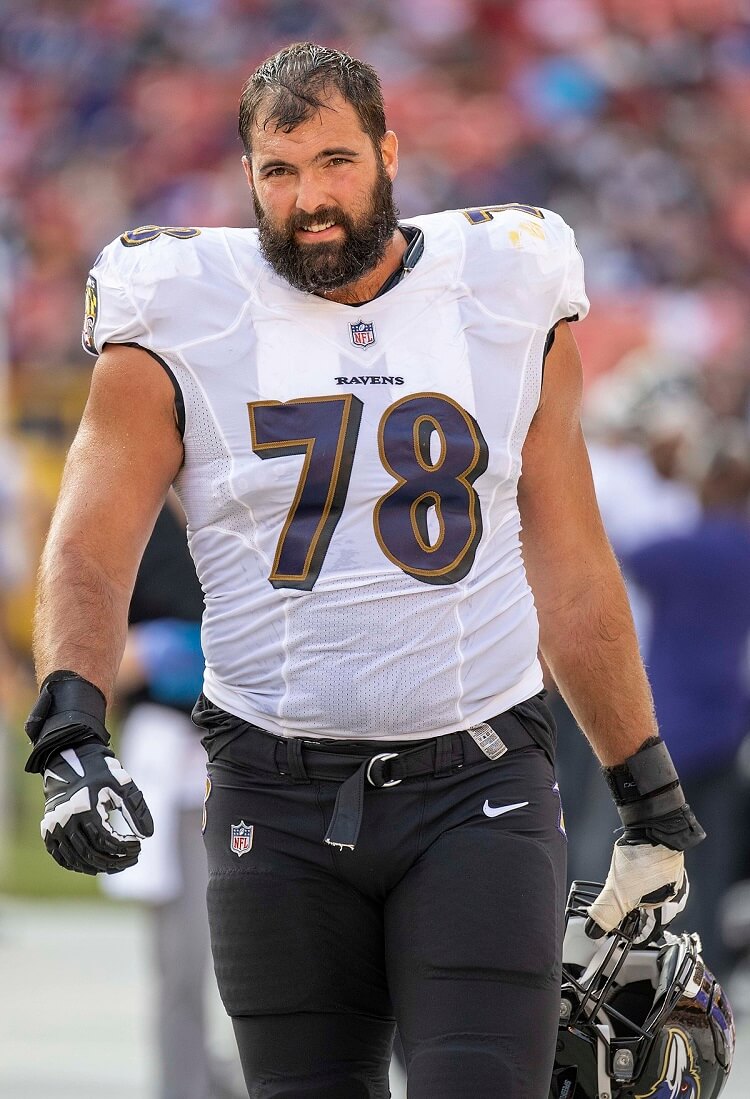 Alejandro Villanueva is one of the latest scariest tackles in the NFL. The Pro Bowler towers over the enemy’s defense line at 6 ft 9 inches.

The Pittsburgh Steelers signed Villanueva as an untrained free agent in 2014.  Villanueva currently plays for the Baltimore Ravens. 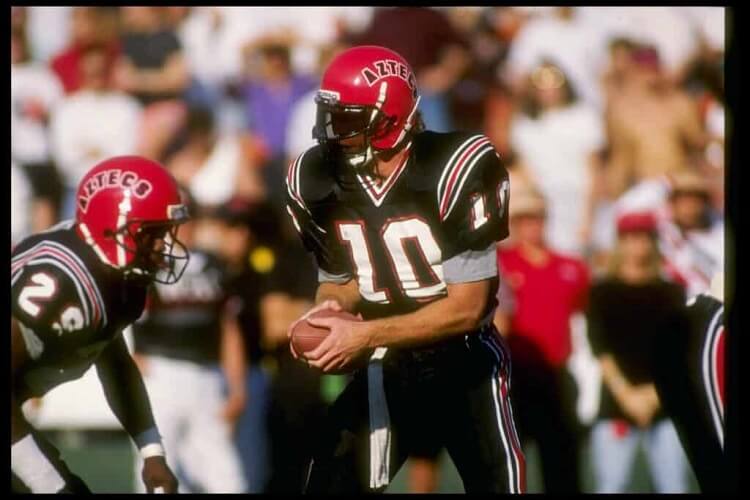 Dan McGwire, who stands at 6 feet 8 inches tall, is a member of our list. Dan only played from 1991 to 1995, so his career was only over a decade long. He is Mark McGwire’s younger brother, a Major League Baseball player.

Dan played football with the Seattle Seahawks for four seasons and the Miami Dolphins for one. Because of his poor performance, the Seahawks had to bring Rick Mirer to fill his spot. In 1995, he quit the NFL. 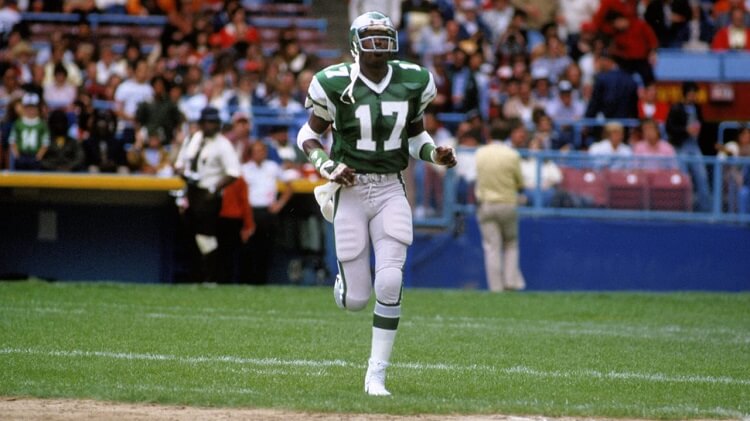 The most accomplished NFL player on our list is Harold Carmichael. In NFL history, he is the highest-scoring Wide Receiver. Before playing football, he played college basketball at Southern University.

The Philadelphia Eagles swiftly identified his talent and selected Carmichael in the NFL Draft of 1971. He had a lot of support from fans during his career and was even named Man of the Year in 1980.

The well-known wide receiver has over 1,000 receiving yards for three seasons and four Pro Bowl appearances. Carmichael led the Eagles with six receptions and 91 yards in his only Super Bowl appearance in 1980 and defeated the Oakland Raiders. 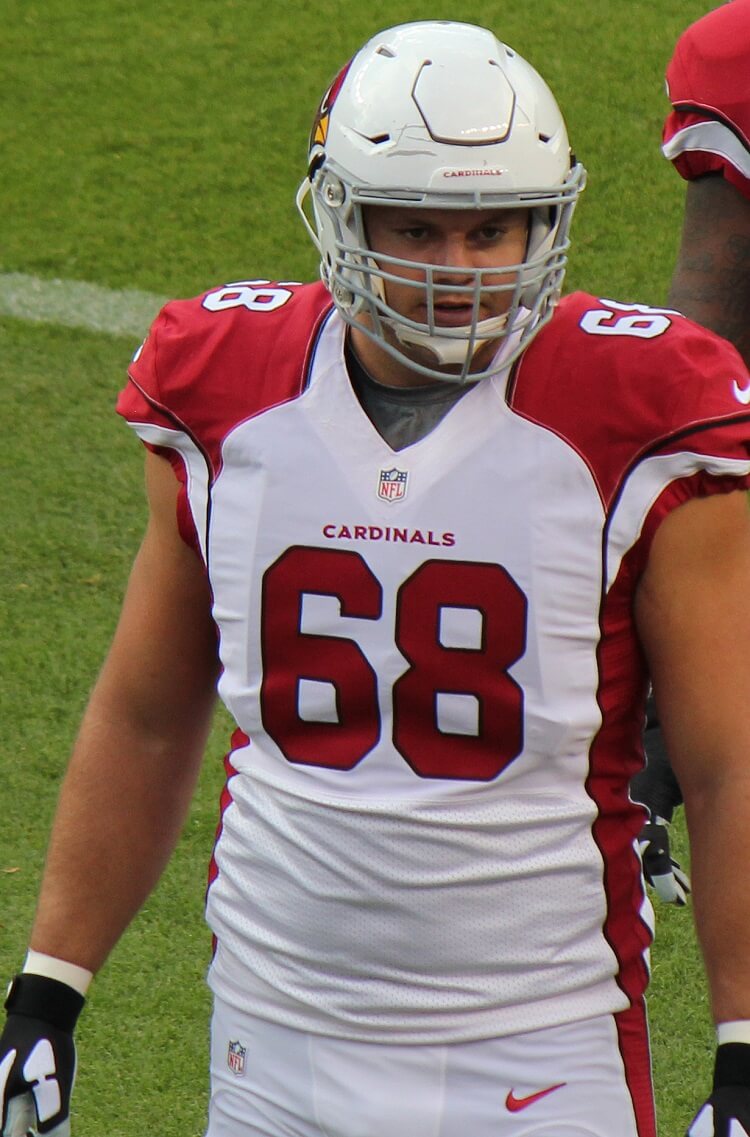 Jared Veldheer, 6 feet 8 inches tall, is ranked 9th on this list. Following his selection by the Oakland Raiders, he started his NFL career in 2010. He played center when he first entered the NFL but eventually switched to offensive.

He joined the Arizona Cardinals in 2014 after signing a $35 million, five-year contract. At the end of 2018, he was traded to the Denver Broncos.

Jared continues to play, switching teams frequently, including the Indianapolis Colts in 2020 and the New England Patriots and Green Bay Packers in 2019. Veldheer re-signed with the Packers in 2021. 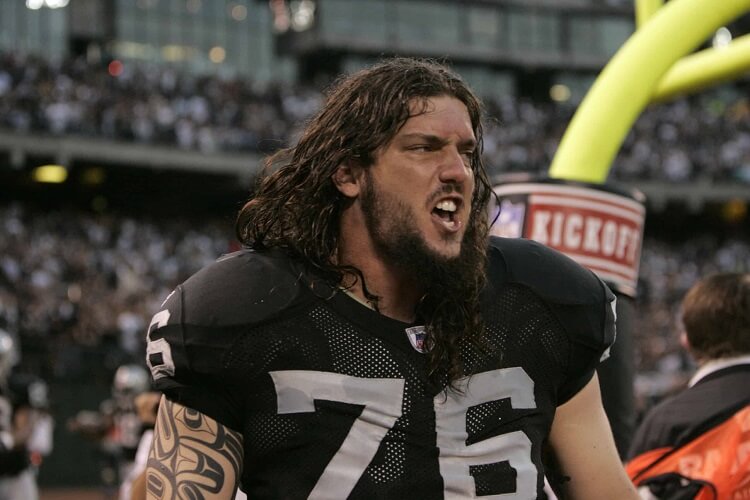 Robert Gallery is the tallest guard in NFL history. He began his career as a right tackle for a few seasons before switching to left tackle for the 2006 season. Because of his poor performance at this position, the Raiders chose to let Gallery play left guard.

He soon establishes himself and suits the new role quite well. He has started at LG for the Raiders for the previous four seasons and later signed with the Seattle Seahawks during the 2011 NFL offseason.

The following is the list of some of the tallest players in the NFL:

Is there a Height Requirement for the NFL?

There is no height limit that you cannot play in the NFL if you are too tall. The standard height limit in the NFL is 6 foot 2 inches, with an average weight of 216 lb (98 kgs). However, some exceptions exist, as many NFL players go as tall as 7 ft and as short as 5 ft.

However, standard height helps you have better chances of being drafted into the NFL. If you are worried about whether you will be picked as an NFL player because of your unconventional height and consider yourself too tall to be an NFL player, then don’t worry.

The world of American Football is full of players with unconventional and ridiculous heights, such as the tallest players in the NFL that we have discussed in our blog.

Every year, a few gifted college football players are passed over for the NFL because of their poor measurables—for example, their height and weight—in the NFL draft.

Although there is not a height limit in the NFL, there are advantages of being standard 6 ft 2-inch players.

However, if your height exceeds the average limit, it doesn’t mean you cannot be a player in the NFL. Many exceptional NFL players, such as Harold Carmichael and Tom Brady, had more than average height.

Tall quarterbacks in the NFL have an edge since it’s easier to see over the shoulders of big offensive and defensive linemen while they’re in the pocket during a passing situation.

Tall wide receivers have the edge over shorter defensive backs in that they can reach far higher to catch passes thrown far and wide. This benefit is limited because tall receivers are typically less agile and have slower overall speeds and less strength.

Tight ends are often taller than 6 ft 4 in (1.93 m), which benefits them as receivers because they run shorter routes that rely less on speed and require more body mass to be effective blockers.

To be powerful enough to play their positions, offensive and defensive linemen typically stand at least 6 ft 1 in (1.85 m) tall and as much as 6 ft 8 in (2.03 m). A more towering defensive lineman may use their extended arms to swat down passes, which is a distinct advantage.

How tall do you have to be a part of the NFL?

There is no height restriction in the NFL. However, most NFL players are 6 ft 2 inches in height.

Who is the tallest quarterback in the NFL?

Dan McGwire is the tallest quarterback in NFL history at 6 ft 8 inches.

Who is the tallest NFL player ever?

The tallest NFL player is Richard Sligh, who is 7 ft tall.

How tall are the NFL cornerbacks?

The National Football League is the most famous American football event. The event has significantly benefited from the presence of tall players. They can overpower the opposition thanks to their physical superiority, which helps the team win.

In our blog, we have discussed the tallest players in NFL, whose unconventional height made them a great asset to the team.