Rugby and American football share many characteristics in common, including a strong focus on physicality, speed, and aggression. Both sports also are included among the top 10 popular sports worldwide.

The relationship between American football and rugby—in which American football originated from rugby in the 19th century—makes this not at all strange. There are, however, some key differences between the games.

Some of the key differences between the two sports are the number of players in the game, the field, the equipment used, how the action stops and starts, how the ball can be advanced, and the number of points awarded for different scoring methods.

Although there are significant differences between both sports, fans often confuse about the games because the differences are only visible to someone with a keen eye and knowledge of the games.

If you don’t have unlimited sports knowledge and are new to rugby and American football, don’t worry. We are here to answer all your questions regarding NFL vs Rugby and why you should watch them.

The Comparison Between NFL and Rugby

The NFL and Rugby share some similarities due to their shared origin, but in their essence are different sports with different rules. However, because both are tackling sports, it can confuse some people to differentiate between the two.

Therefore, to make it easier for fans to understand the game, we have highlighted the significant differences between the two sports.

The following are some of the dissimilarities that the National Football League shares with rugby.

NFL vs Rugby: Object of the Game 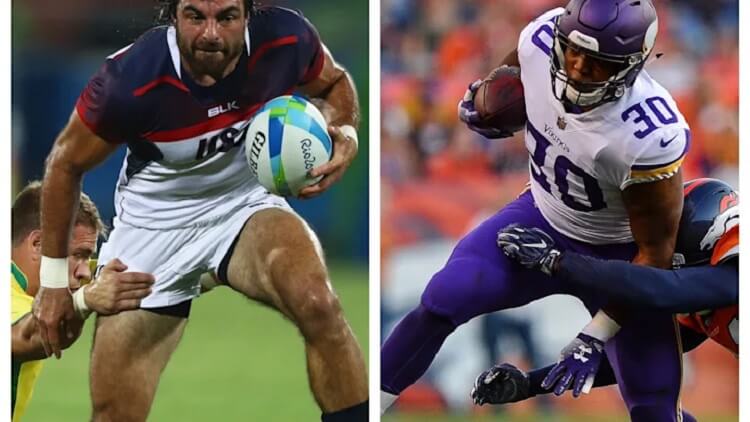 The object of both sports is similar, but the main difference exists due to different sets of rules. Carrying the ball behind the opposite touchline (called a touchdown) allows you to score more points than the other team in American football.

Another way to achieve a goal and earn points is by a field goal. In a field goal, a player kicks the ball between the goalposts.

Rugby’s goal is relatively similar, but to score a “try,” the player must carry the ball behind the opposition’s touchline. Depending on the situation, a player can also score points by kicking the ball between the goalposts (sometimes referred to as a conversion, drop goal, or penalty kick).

NFL vs Rugby: Number of Players

However, the type of rugby played determines how many players are on the field. Rugby union, in which each side has 15 players on the field, and rugby league, in which each team has 13 players, are the two most popular forms of rugby.

Different versions of these games involve fewer people, such as eight-man football and rugby sevens, in which each team consists of seven players.

According to the specific league or tournament rules, rugby teams can use up to seven substitutions per game. Once a player has left the field of play, they cannot return unless injured, and no other substitutes are available. As a result, most players need to be versatile enough to excel on offense and defense.

However, the majority of NFL players specialize in either offense or defense. It is common for 11 new players to enter the game whenever a team takes or loses the ball possession.

In addition, during any moment between plays, one or more players may be substituted into the game. Some players are specialists who excel at a particular task since there is no limit to the number of substitutions done throughout a match.

Along with many other differences, the timings of both sports also vary. Rugby games typically last 80 minutes, divided into two 40-minute halves.

A full-length National Football League game lasts 60 minutes and is divided into four 15-minute quarters. If the score is tied at the end of regulation in any sport, overtime may be played.

In both sports, carrying the ball across the opposing team’s goal line and kicking it through the goalposts are the two primary ways to score. Different points are awarded for doing this depending on how they are carried out or the game’s circumstances.

A safety, which occurs when a team is stopped in its end zone or loses control of the ball and sees it leave its end zone, is another way to score in the National Football League.

A touchdown in NFL is defined as carrying the ball across the opposition’s goal line or catching it in the end zone. A touchdown is worth six points.

In rugby, an analogous play known as a try occurs when the ball is touched on the ground in the in-goal area of the opposing team. A try is worth five points in rugby union, but it is worth four points in rugby league.

The scoring side has an opportunity to score more points following a touchdown or attempt. If the ball is kicked over the crossbar of the goalposts, it counts as a conversion in rugby and earns two points.

It is called a try after a touchdown in the NFL and is worth one or two points depending on whether the ball was advanced into the end zone by running, passing, or through the goalposts. 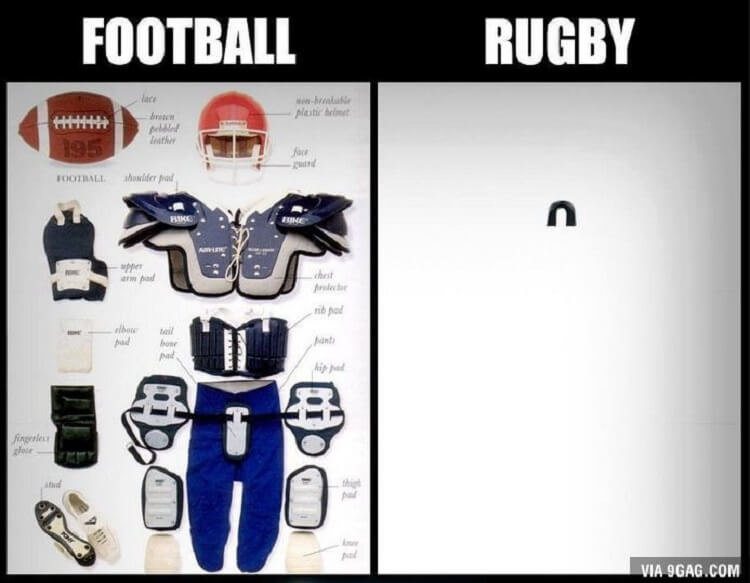 The gear that players wear while playing makes a big difference to them. Rugby players use minor protective gear; most merely use gum shields.

Although wearing hard protective equipment is not permitted, some people wear soft padding to protect their ears, shoulders, and collarbones.

However, many protective gears in the National Football League include helmets, shoulder and chest pads, leg protectors, and a gum shield. The wearing of them is required and is not optional.

Although the fields used in rugby and NFL look identical, they are measured differently. The two fields are rectangular, with goalposts at either end and white lines defining certain field areas. 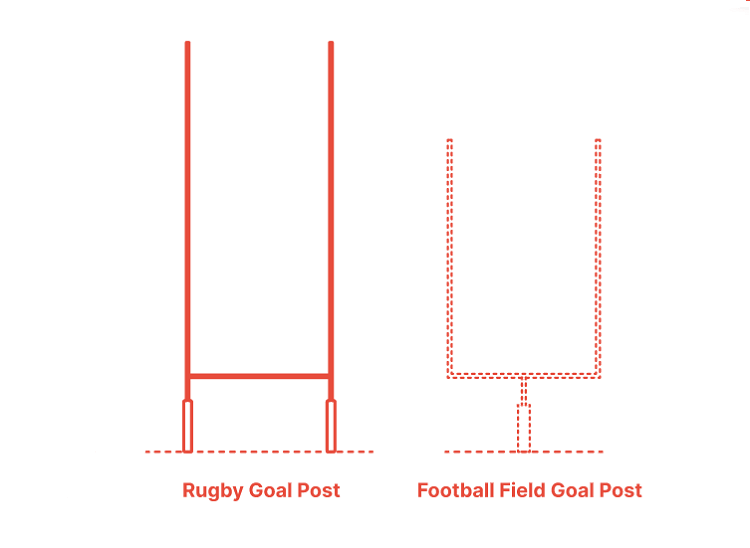 The goalposts of the NFL and rugby are similar in shape but differ in size. The uprights of a rugby goalpost are 18.4 feet (5.6 m) apart, while the crossbar is 9.8 feet (3 m) above the ground.

NFL goalposts can be H-shaped, although they frequently have a single post in the center on the floor and two uprights from the crossbar.

The goalposts are located at the back of each end zone in football instead of being on each goal line or try-line like in rugby.

When discussing the popularity of both sports, the difference between both sports becomes major. The National Football League is a domestic sport in the United States. Even though the NFL is one of the wealthiest sports in the world, its fan base is quite restricted.

Rugby is played worldwide and is a popular sport in 94 countries, according to the International Rugby Board rankings. The Rugby Union, the biggest rugby tournament, is played in New Zealand, while the Rugby League is more prevalent in Australia.

Over 10 million people play rugby in 221 countries, and the sport has over 405 million fans worldwide. The men’s rugby world cup held in Japan attracted 857 million television viewers, making it the sixth most viewed athletic event in history and making the sport one of the most popular in the world.

NFL vs Rugby Players: Which is Tougher?

The most debatable topic when discussing the NFL and rugby is which one of the two sports is tougher.

Rugby players also frequently play on despite minor wounds, regardless of how much blood appears on their uniform. A lack of padding increases the likelihood of a player having an injury.

Tackles are also a problem because they always seem a little more savage in rugby. After all, there is so little cushioning to protect the player being tackled. Most rugby players choose to use a gum shield rather than wearing heavy helmets and shoulder pads.

Since all the American football fields are artificial turf, there is never any mud. Thus it would seem that players are a little hesitant to play in it. Many US stadiums have roofs, so they don’t even have to worry about the rain.

Contrarily, rugby players have played in all kinds of weather and are always covered in mud by the time the game is complete unless there hasn’t been any rain in weeks.

NFL vs Rugby Players: Who is Bigger?

The NFL and Rugby are both the game of large, bulky men. The heights and weights of the players give them an advantage in tackling sports. However, both sports players have different positions in both sports.

Here, we have compared the NFL’s players’ positions and their weight and height with closely related positions and measurements of rugby players to analyze which players are bigger.

According to the stats shown above, it is evident that the NFL players are bigger in size compared to the rugby players.

Is Rugby Union more popular than the NFL?

According to stats, the Rugby Union is the 9th most popular sport and is played in 123 countries. On the other hand, American football is played only in 80 countries and is ranked number 10.

Where can you watch NFL and Rugby in the United States?

In the United States, you can watch the NFL on Fox, ESPN, CBS Sports, NFL Network, NFL+, etc. Rugby games are available to watch in the US on Watch NRL, NBC Sports, ESPN+, etc.

What are the major rugby tournaments?

There are two major types of rugby games such as rugby league and rugby union. Both of these games have different tournaments such as Rugby World Cup, National Rugby League, Six Nations Championships, The Rugby Championship, Rugby League World Cup, Challenge Cup, etc.

What is the National Football League finale called?

The National Football League’s finale called the Super Bowl is one of the biggest events in the United States.

Rugby and The National Football League are two different sports that only share a common ancestry. Both of these games are played on two different levels. The NFL is only a domestic American football tournament played in the United States, while Rugby is played on all continents.

When discussing NFL vs Rugby, we have many parameters to compare because of the difference in the gameplay, nature of players, number of players, equipment worn during the game, field measurement as well as the popularity of the sports.

These parameters will help us understand what significant differences are present in both sports and what similarities they share. 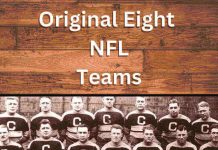