The NFL and the NBA are significant American Leagues, the first and third wealthiest professional sports leagues, respectively.

Now, I understand that these are two different sports leagues, but with fans all over the world, people can’t help but compare these two leagues. You can find dozens of questions on the internet like “Is the NFL or NBA more popular?” and “What’s better, the NFL or NBA?” etc.

According to the findings and surveys, the NFL remains the top professional sports league in the United States. The National Football League is followed by 52 percent of self-described sports enthusiasts, compared to 42 percent for the NBA and 31 percent for the MLB.

Now, all the curious NFL and NBA fans, we have all the answers to any NFL vs. NBA queries. Find out which sport you people think is superior by reading the rest of our guide.

Comparison Between NFL And NBA

The National Football League and the National Basketball Association are both different sports. They have nothing in common except that both are the most anticipated leagues in America. 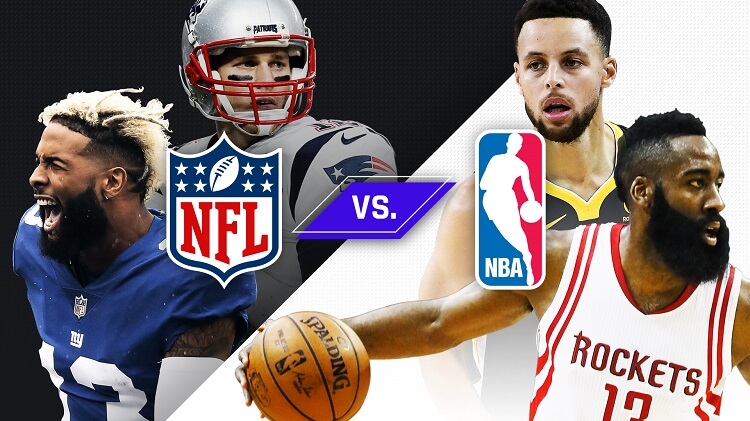 Here is a table of differences between the NFL and NBA:

The NFL is, without a doubt, the most well-liked sports league in the United States. Roger Goodell has done a great job of elevating the league to the status of the national pastime, defining sport and a multibillion-dollar enterprise.

With those figures, the NFL has become the most lucrative league not just in America but also globally. The high revenue is primarily due to deals and visibility on television. Football is the most popular sport that viewers watch on television in general.

For the 2014–2022 seasons, the NFL will earn $5 billion yearly through its contracts with Fox, CBS, NBC, and ESPN. The NBA generates $930 million in income from television.

With Anheuser-Busch, which pays the NFL more than $250 million annually for the rights to sell beer and hard seltzer, the NFL renewed its contract in December. The sum is 90% higher than it was five years ago.

The ticketing industry also generously supports the leagues. According to an ESPN article, teams in the NBA averaged between 15,000 and 20,000 spectators during the 2019–2020 season.

Given that game tickets typically cost $75, the revenue from ticket sales is pretty substantial. However, based on the abovementioned averages, NFL teams might make more than $10 million in ticket sales from a single, utterly sold-out stadium event.

Therefore, without a doubt, NFL games sell more tickets than NBA fans. Which makes them the top-earning leagues in America.

Which League Has More Viewers Internationally?

Per views and fame, NFL is one of the wealthiest professional sports leagues compared to the NBA. The professional American football league is not just famous in America but has collected hearts from all over the globe.

According to the stats, in 2021 NFL is responsible for 75% of the most watched sports while the competitors, including the NBA, MLB, and NHL, were nowhere. A few aspects of the NFL being the most viewed sports league. Some of them are

This is a fascinating query. The NBA is the most international American sports league, far more so than the NFL. But it doesn’t appear to be the case. The NFL is the most famous American Football League in the entire world.

The 2022 NBA Finals have the most outstanding ratings since the Warriors last played in the Finals in 2019, with viewership up 37% from the previous year.

However, 17.1 million fans watched on average for the 2021 NFL regular season. On the other side, the 2022 National Basketball Association (NBA) finals averaged 12.4 million viewers in the US, a 22% year-over-year increase in viewing.

The 2022 NBA Finals have the most outstanding ratings since the Warriors last played in the Finals in 2019, with viewership up 37% from the previous year.

Last season, the lowest-rated NFL playoff game received an average of 6.4 ratings and 11.90 viewers for Game 1, which was played in the meantime (23.2 million; Monday Night Wild Card Game, Rams-Cardinals). That doesn’t sound good for the NBA, but the comparison isn’t accurate.

There are multiple games in the NBA playoff draw. It is the complete series. Given that it is a unique game in the NFL, more viewers are likely to tune in. There is no denying that the NFL attracts a more significant viewership.

Let’s discuss “NFL vs. NBA Salaries,” one of the NFL vs. NBA questions since the NFL and NBA are both international American sports leagues. Let’s learn what a player from both leagues may expect.

First-year NFL players may anticipate earning an average salary of $365,000 annually, with annual increases of between $5,000 and $10,000 possible.

The majority of the money made by rookies, on the other hand, comes from bonuses, such as the roster bonus, signing bonus, contract incentives, and a few more types.

The NFL minimum is usually a rookie’s starting point, but excellent players may receive a raise.

NFL quarterbacks make an average income of about $4 million per year, compared to NFL players, who get an average salary of $1.9 million.

The NBA, on the other hand, bases its minimum pay rates on the number of seasons a player has played in the league. A rookie may anticipate earning at least $838,464 per season, increasing to $1,349,383 in their second season.

A player with five NBA seasons or less earns $1,757,429, and a player with ten or more earns $2,393,887. The NBA’s maximum pay levels can also change based on whether you re-sign with a franchise or choose to leave.

The highest they may earn after ten or more seasons in the league is $35,654,150. They are eligible for an 8% annual rise for up to five years. The maximums for players joining new teams begin the same but only increase by 5% yearly up to four years.

Is NFL Bigger than NBA?

Giving a definitive answer is difficult as both professional sports are the most impactful and powerful leagues in the United States. However, one always tends to dominate the other in a few aspects. NFL appears to be the bigger league compared to some metrics.

Keeping in mind that NFL is 101 years old whereas the NBA is 75 years in age gives NFL another benefit to gain fame. However, the leagues have different game formats and ruling structures it is difficult to answer which one is bigger.

This is why we have used a few specific metrics to measure the size of each League; comparing the viewership and financial aspects, we will conclude the answer. 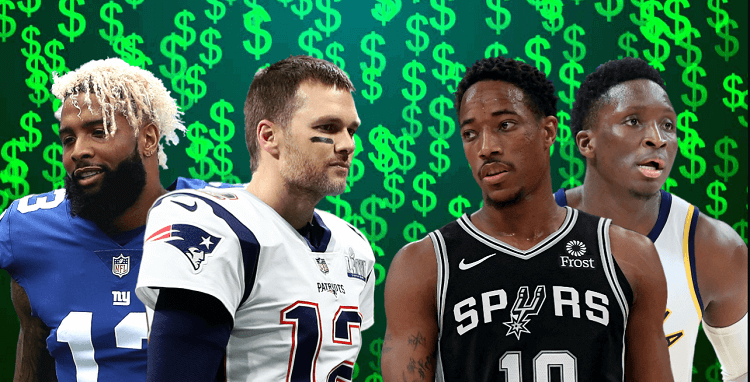 Firstly, we are comparing the leagues based on the revenue they generate with the league. Each league, including the NFL and NBA, generates revenue through sponsorships, jersey sales, Television broadcasting deals, and not to forget ticket sales.

Unfortunately, the pandemic has kept the viewers away from the grounds, whereas for now, they are all returning to cheer for their teams out loud.

However, all the stats mentioned above in the article prove that NFL would win if compared solely on revenue.

According to Forbes, Dallas Cowboys is the most valuable sports team, with a value of $700 million above the New York Knicks, which is the NBA’s best and most helpful team.

Other than that, in the top 20 most valuable sports teams, NBA only has 3 helpful, whereas NFL has 8 helpful teams.

When talking about copyright, NBA is nowhere near the NFL. The National Football League is one of the most in-demand leagues all around the globe.

This is why it has signed an 11-year contract with the top sports broadcasters, namely, ESPN, Fox, NBC, Amazon, and BCS.

This deal costs $113 Billion over the course of 11 years, which means $10.27 Billion per year, four times that of the NBA. Copyrights and dealerships generate revenue for the league, and the NFL has won another metric.

Other than revenue and broadcast rights, we are left behind with viewership in which NFL leads. The actual comparison is made for the Super Bowl and the NBA finals. NFL has given its broadcasting rights to multiple countries worldwide, giving it the most viewership.

The Super Bowl is a massive event compared to any of the NBA matches; comparing it with the NBA finals might be a better idea.

However, the Super Bowl grew more attention than the NBA final in 2021. According to the counting, 59 million people watched the Super Bowl.

In terms of the stats and numbers, it is clear that NFL beats NBA. However, NBA is all set to fight back to get the position they have been looking for.

Will the NBA make it up to the NFL?

NBA is now working on its marketing strategies one by one. It was a little late, but they realized that to win from the NFL in terms of popularity, they needed to uplift their game. They have added a pre-season NBA game schedule in countries such as China and London.

This will bring international attention from the global market, which the NBA particularly needs. Other than branding the league, the NBA has been in luck. The NFL has been making some poor choices leading to NBA getting a better chance to be number one.

This growing league has established itself in the international market and is better than any other U.S sport. Its revenue has been increasing outside the U.S in the high teens annually. Sal Galatioto said, “NBA is well-positioned for international sports and what is excellent and exciting in basketball worldwide.

NBA’s reach out has primarily been focused on China and Mexico. This is why its worth has increased 22% since the last year, and its franchise value has also tripled in the previous 5 years.

Which of the following is streamed the most, the Super Bowl or the NBA playoffs?

NBA 2017 finals were we would more than they had in two decades. It has over 20.4 million viewers. The pictures night of the series, the last and the final came between Cleveland Cavaliers and Golden state warriors, has over 24.5 million views.

At the same time, over 111.3 million people tuned in to watch super bowl LI the season before the last one. This season, 103.4 million viewers tuned in to watch the super bowl in which the Philadelphia Eagles beat the  New England Patriots. So if we compare, the NBA playoffs have been viewed the most.

When did the NBA start playing and broadcasting in China?

When Yao Ming’s Houston racket beat the Sacramento king in a pre-season game in Shanghai in 2004 NBA became the first American international sports League to be played in China. CNN stated that the NBA has over 100 million followers in China.

NBA is experiencing a huge upward trend for now, whereas the NFL is just resting on their higher numbers, assuming that this will be enough for them to stay above NBA, But by doing so, they are ignoring their downward spiral.

The fact that football is an inherently brutal game prevents it from ever being injury free. But to try to prevent its players from injuries, particularly concussions, NFL has recently made some changes in the rules.

As compared to NFL, NBA is a safe sport that can easily be played in your driveway with your friends. Best players accredited shoes are their international marketing strategy.

They also have a commissioner who is more in touch with what its players deserve than his counterpart; there’s definitely a force that NFL must consider.

As our research for NFL vs. NBA, NFL is the domineer for now, but if they don’t change the way they do business, they won’t be able to stay at the top for a long time.